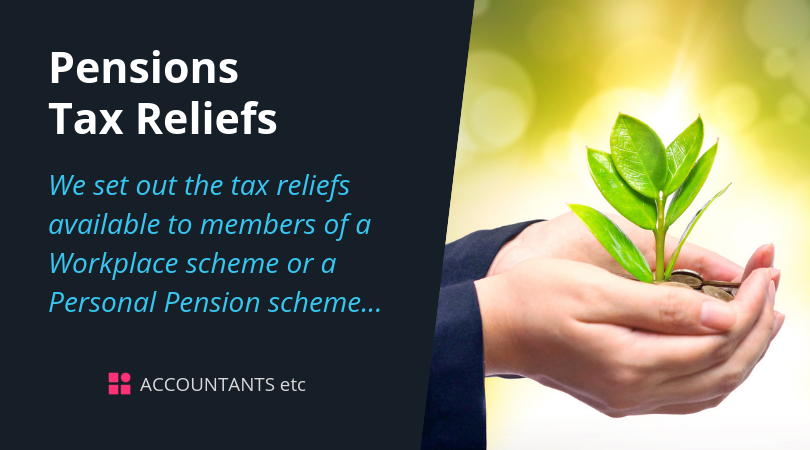 We set out below the tax reliefs available to members of a money purchase Workplace scheme or a Personal Pension scheme.

There are two broad types of pension schemes from which an individual may eventually be in receipt of a pension:

A Workplace pension scheme may either be a defined benefit scheme or a money purchase scheme.

A defined benefit scheme pays a retirement income related to the amount of your earnings, while a money purchase scheme instead reflects the amount invested and the underlying investment fund performance.

The number of defined benefit pension schemes has declined in recent years in part due to the regulations imposed upon the schemes and the cost of such schemes to the employer.

All employers will soon need to provide a workplace pension scheme due to auto enrolment legislation and these are likely to be money purchase schemes.

A Personal Pension scheme is a privately funded pension plan but can also be funded by an employer. These are also money purchase schemes. Self-employed individuals can have a Personal Pension.

We set out below the tax reliefs available to members of a money purchase Workplace scheme or a Personal Pension scheme.

It is important that professional advice is sought on pension issues relevant to your personal circumstances.

To benefit from tax privileges all pension schemes must be registered with HMRC. For a Personal Pension scheme, registration will be organised by the pension provider.

When the ‘new’ pension regime was introduced from 6 April 2006 no limits were set on either the maximum amount which could be invested in a pension scheme in a year or on the total value within pension funds. However two controls were put in place in 2006 to control the amount of tax relief which was available to the member and the tax free growth in the fund.

Firstly, a lifetime limit was established which set the maximum figure for tax-relieved savings in the fund(s) and has to be considered when key events happen such as when a pension is taken for the first time.

Secondly, an annual allowance sets the maximum amount which can be invested with tax relief into a pension fund. The allowance applies to the combined contributions of an employee and employer. Amounts in excess of this allowance trigger a charge.

There are other longer established restrictions on contributions from members of money purchase schemes (see below).

All UK residents may have a money purchase pension. This includes non-taxpayers such as children and non-earning adults. However, they will only be entitled to tax relief on gross contributions of up to £3,600 per annum.

An individual is entitled to make contributions and receive tax relief on the higher of £3,600 or 100% of earnings in any given tax year. However tax relief will generally be restricted for contributions in excess of the annual allowance.

Tax relief on contributions are given at the individual’s marginal rate of tax.

An individual may obtain tax relief on contributions made to a money purchase scheme in one of two ways:

In both cases the basic rate is claimed back from HMRC by the pension provider.

A more effective route for an employee may be to enter a salary sacrifice arrangement with an employer. The employer will make a gross contribution to the pension provider and the employee’s gross salary is reduced. This will give the employer full income tax relief (by reducing PAYE) but also reducing National Insurance Contributions.

There are special rules if contributions are made to a retirement annuity contract. (These are old schemes started before the introduction of personal pensions.)

Individuals who are eligible to take amounts out of their pension funds under the flexibilities introduced from 6 April 2015 but who continue to make contributions into their schemes may trigger other restrictions in the available annual allowance. This is explained later in this factsheet in ‘Money Purchase Annual Allowance’.

Lower annual allowance for those with ‘adjusted annual incomes’ over £150,000

From April 2016 a taper has been introduced which restricts the annual allowance available for those with ‘adjusted annual incomes’ over £150,000. Adjusted income means, broadly, a person’s net income and pension contributions made by an employer. For every £2 of adjusted income over £150,000, an individual’s annual allowance will be reduced by £1, down to a minimum of £10,000.

The rate of charge if annual allowance is exceeded

The charge is levied on the excess above the annual allowance at the appropriate rate in respect of the total pension savings. There is no blanket exemption from this charge in the year that benefits are taken. There are, however, exemptions from the charge in the case of serious ill health as well as death.

The appropriate rate will broadly be the top rate of income tax that you pay on your income.

Anthony will have had tax relief on his pension contributions of £25,000 (£62,500 x 40%) and now effectively has £9,000 clawed back. The tax adjustments will be made as part of the self assessment tax return process.

To allow for individuals who may have a significant amount of pension savings in a tax year but smaller amounts in other tax years, a carry forward of unused annual allowance is available.

This effectively means that the unused annual allowance of up to £40,000 can be carried forward for the next three years. Importantly no carry forward is available in relation to a tax year preceding the current year unless the individual was a member of a registered pension scheme at some time during that tax year.

The lifetime limit sets the maximum figure for tax-relieved savings in the fund at £1,030,000

If the value of the scheme(s) exceeds the limit when benefits are drawn there is a tax charge of 55% of the excess if taken as a lump sum and 25% if taken as a pension.

The government have amended the rules for how individuals use their pensions savings. Back in 2014, George Osborne announced 'pensioners will have complete freedom to draw down as much or as little of their pension pot as they want, anytime they want'. The changes came into effect on 6 April 2015 for individuals who have money purchase pension funds.

Individuals have flexibility to choose how to access their pension funds from the age of 55. The options include:

Where a lump sum and annuity are not taken access to the fund can be achieved in one of two ways:

When an allocation of funds into a flexi-access account is made the member typically will take the opportunity of taking a tax free lump sum from the fund.

The person will then decide how much or how little to take from the flexi-access account. Any amounts that are taken will count as taxable income in the year of receipt.

Access to some or all of a pension fund without first allocating to a flexi-access account can be achieved by taking an uncrystallised funds pension lump sum.

The tax effect will be:

The government is alive to the possibility of people taking advantage of the flexibilities by 'recycling' their earned income into pensions and then immediately taking out amounts from their pension funds. Without further controls being put into place an individual would obtain tax relief on the pension contributions but only be taxed on 75% of the funds immediately withdrawn.

The MPAA sets the maximum amount of tax efficient contributions in certain scenarios. The allowance is currently set at £4,000 per annum and was £10,000 per annum prior to April 2017.

There is no carry forward of any of the annual allowance to a later year if it is not used in the year.

The main scenarios in which the reduced annual allowance is triggered are if:

However just taking a tax-free lump sum when funds are transferred into a flexi-access account will not trigger the MPAA rule.

This information guide provides general information on the making of pension provision. Please contact us for more detailed advice if you are interested in making provision for a pension.