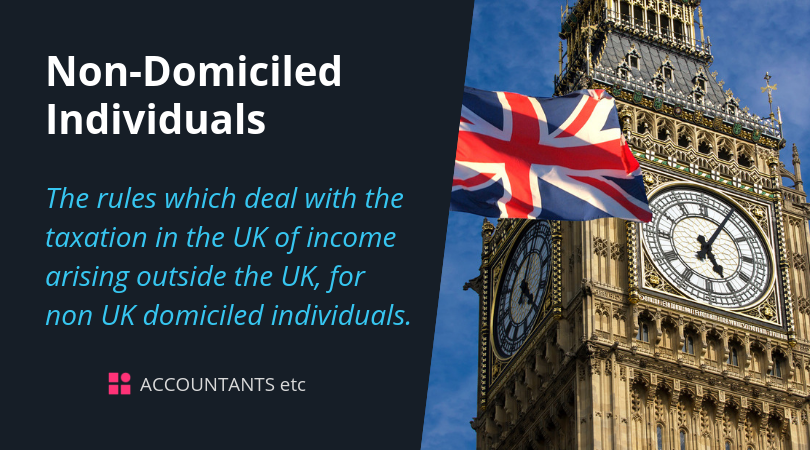 This guide sets out the rules which deal with the taxation in the UK of income arising outside the UK, for non UK domiciled individuals.

An individual who is resident in the UK but is not domiciled (referred to as 'non-dom') may opt to be taxed on what is termed the 'remittance basis' in respect of income and capital gains arising outside the UK. What this means is that instead of being taxed on their actual income/gain arising in the year, they are taxed on the amount of that income/gain actually brought into the UK in the tax year.

Every non-dom must give very careful consideration to their UK tax position and take extreme care in planning their overseas income and capital gains. 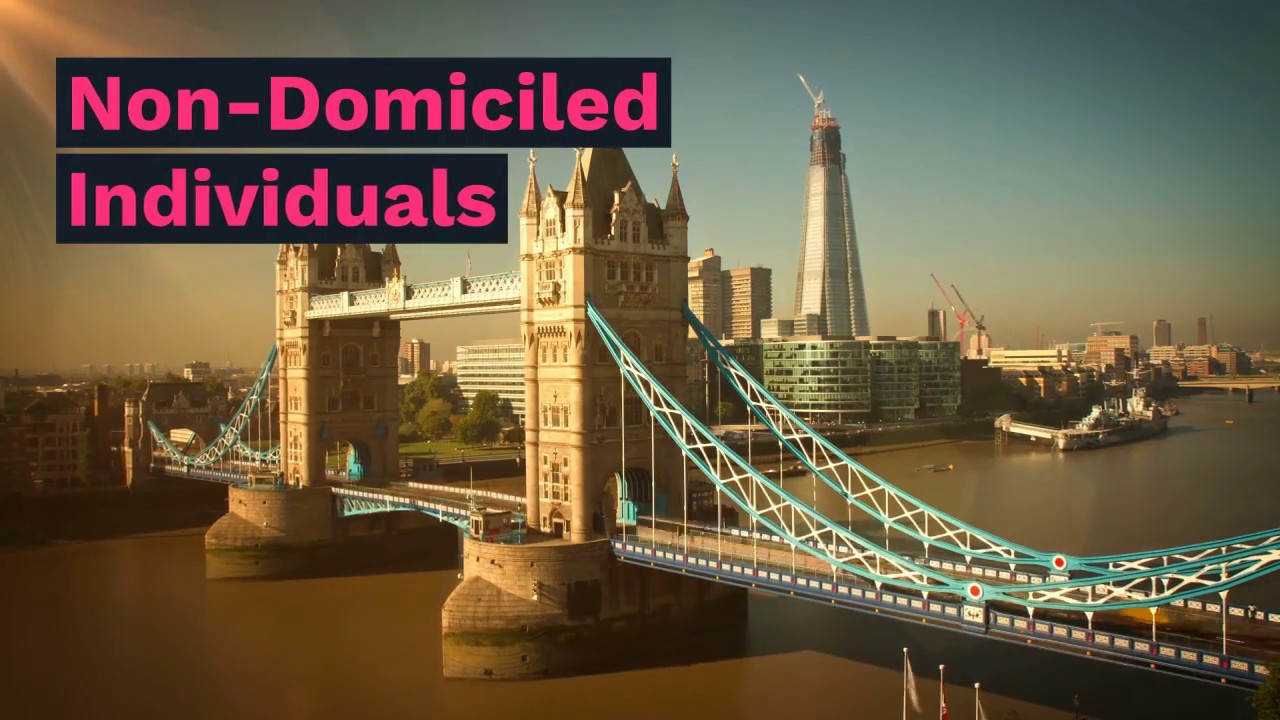 The starting point of liability for all non-doms is that overseas income/gains are taxable on the arising basis just as they are for any UK domiciled individual. The non-dom will have the option of making a claim for the remittance basis to apply, but if they make this claim, they will automatically forfeit their personal allowance for income tax purposes and their annual exemption for CGT. This will obviously impact on their total tax liability including any UK income/gains.

The main situation where a non-dom will be able to benefit from the remittance basis without making a claim and will therefore retain their allowances is when they remit to the UK all but a maximum of £2,000 of their income and gains arising abroad in the year.

Jan, who is domiciled in Poland but who has been living in the UK for five years, has rental income arising from the letting of property in Poland. Let's pose two different scenarios for 2018/19 assuming his overseas income is £5,000.

Scenario 2: He remits £3,000 to the UK. He can have the benefit of the remittance basis and pay tax on only £3,000 because he has left no more than £2,000 unremitted. He will retain his personal allowance.

What is a long term resident?

Matters become more complex and serious when an individual falls within the definition of a long term UK resident. This will arise when the individual has been resident in the UK for at least seven out of the nine UK tax years preceding the one for which liability is being considered. For these purposes a part year of residence counts as a full year. In considering the position for 2018/19 it is necessary to look at the individual’s UK residence position going back as far as 2009/10 (ie to 6 April 2009). If they have been UK resident for at least seven of those years then they will be classed as a long term resident for the purpose of the remittance basis.

Sanjay first came to the UK in July 2011. He will be classed as resident here from 2011/12 which will mean that he meets the seven year rule and will therefore be treated as a long term resident in 2018/19. If his residence had not commenced until July 2012 he would only have six years of residence and would not become a long term resident until 2019/20.

What are the implications of being a long term resident?

Essentially the long term resident (who must be 18 years of age or over at some time in the tax year concerned) can only claim the benefit of the remittance basis if they pay an additional £30,000 in addition to the tax on any income or gains remitted. This sum is known as the ‘remittance basis charge’ (RBC).

The rules surrounding this charge are complex but the ‘bare bones’ are as follows:

The RBC is not avoided where there is a failure to nominate specific income/gains and such failure may result in duplicate or higher taxation in future years.

Let us assume that Sanjay is then a long term resident for 2018/19 and that he has overseas income arising in India of £6,000. He can only secure the remittance basis for 2018/19 if he pays the RBC. Clearly it would be nonsensical for him to pay that charge to avoid tax on say for example £4,000 of income which was unremitted. He will therefore not elect for the remittance basis and will pay UK tax on the full £6,000 of income arising from India. If that income has been subject to tax in India he may be entitled to set any Indian tax against his UK liability.

He claims the remittance basis and obviously has no liability on remitted income because there is none. He will have to pay the RBC of £30,000 and must nominate income or gains to represent this sum. He could nominate £150,000 of the capital gain which, taxed at 20%, would represent a liability of £30,000.

That would satisfy the RBC and would mean that £150,000 of the gains would not be taxed if it is subsequently remitted. It would also mean, subject to the terms of the UK / Spanish DTA, that he may be eligible for relief in respect of any Spanish tax on this sum.

Higher RBC charges for some

A higher RBC charge applies for an individual that has been UK resident for 12 out of the previous 14 years. This charge is currently £60,000.

If Sergio (from the previous example) has been living in the UK for say 12 years then given the same circumstances he may decide that £60,000 is too high a price to pay.

If he did decide to claim the remittance basis there is still no liability on remitted income because there is none. He would have to pay the increased RBC of £60,000 and must nominate income or gains to represent this sum. He could nominate £300,000 of the capital gain which, taxed at 20%, would represent a liability of £60,000.

That would satisfy the RBC and would mean that £300,000 of the gains would not be taxed if it is subsequently remitted. It would also mean, subject to the terms of the UK / Spanish DTA, that he may be eligible for relief in respect of any Spanish tax on this sum.

What is a remittance?

HMRC take the view that whatever method an individual uses to bring income or gains into the UK it may be treated as a remittance. The rules are very detailed and it is only possible here to give a brief outline.

Essentially a remittance can be caught if it is for the benefit of any person who, in relation to the taxpayer (ie the non-dom with overseas income/gains), is within the definition of a relevant person. That list includes:

Basic concept of a remittance

Two conditions must be in place for a remittance to arise. Firstly property, money, or consideration for a service, must be brought into the UK for the benefit of a relevant person and secondly, the funds for that property etc must be derived directly or indirectly from the overseas income and gains. These rules are much wider than the old rules. Some examples will help to explain the scope.

Alex, a wealthy Canadian lives in the UK with his wife and young children. He has a significant bank deposit in Jersey which generates a large amount of income each year. Any of the following uses of that income would constitute a remittance for UK tax purposes:

There are some exceptions for example clothes, watches and jewellery for personal use and other goods up to a value of £1,000.

In the past it had been possible to use a route known as ‘alienation’ to avoid the remittance basis. This would involve an individual giving someone else their overseas income and then that individual bringing the money into the UK. In the recipient’s hands it would have represented capital and the remittance would have been avoided. Now such a route is not possible. Any attempt at ‘alienation’ which involves the funds ultimately being brought into the UK for the benefit of a relevant person will be caught as a remittance by the taxpayer. This rule is likely to cause some difficult situations.

Alex gifts some of the Jersey income to an adult son. He uses the money to pay for a UK school trip for his own son. The grandson is a relevant person as far as Alex is concerned and this payment will constitute a remittance on which Alex is taxable in the UK.

There are a number of other issues covered by the rules such as:

Where a non-dom remits funds to the UK which are then invested in a qualifying business in the UK those funds are not treated as a remittance so the remittance basis may be more attractive. It should be noted, however, that a claim for the remittance basis still involves paying the appropriate RBC which may be due.

The rules for Business Investment Relief are detailed but the key elements are:

A number of fundamental changes have been introduced and apply from from 6 April 2017:

Such individuals will be classed as ‘deemed’ UK domiciles for income tax, CGT and IHT purposes and will be assessable on worldwide income, gains and assets. They are not able to access the remittance basis.

IT and CGT matters

A non-UK domiciled individual who has been taxed on the remittance basis is allowed to rearrange and transfer amounts between overseas mixed fund bank accounts without being subject to the offshore transfer rules. This will allow the different elements within the accounts to be separated, thereby allowing clean capital to be remitted to the UK in priority to income and gains.

Under the rules the market value of an asset at 5 April 2017 may be  used as the acquisition cost for CGT purposes when computing the gain or loss on its disposal where the asset was situated outside the UK between 16 March 2016 and 5 April 2017. This applies to any individual who becomes deemed UK domicile in April 2017, other than one who is born in the UK with a UK domicile of origin, provided that individual has been subject to a remittance basis charge for any tax year prior to 2017/18.

How can we help

Each individual’s situation is going to have different problems. Please contact us if you would like to discuss how these rules impact on you and the steps you can take to mitigate their impact.