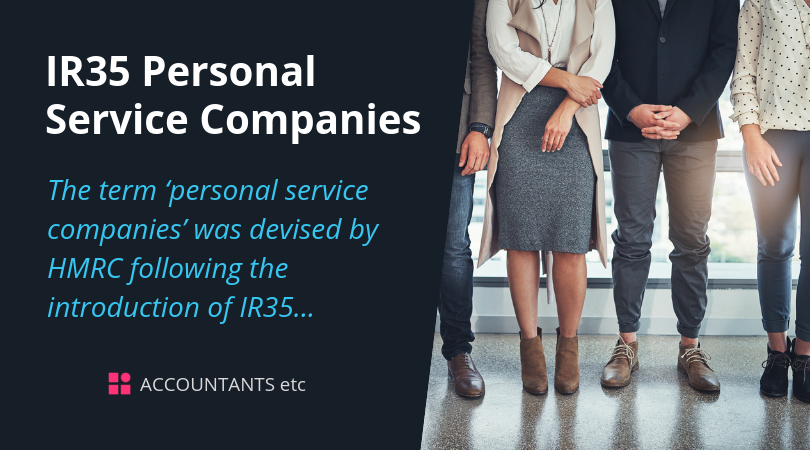 The ‘IR35’ rules are designed to prevent the avoidance of tax and national insurance contributions (NICs) through the use of personal service companies and partnerships.

The rules do not stop individuals selling their services through either their own personal companies or a partnership. However, they do seek to remove any possible tax advantages from doing so. 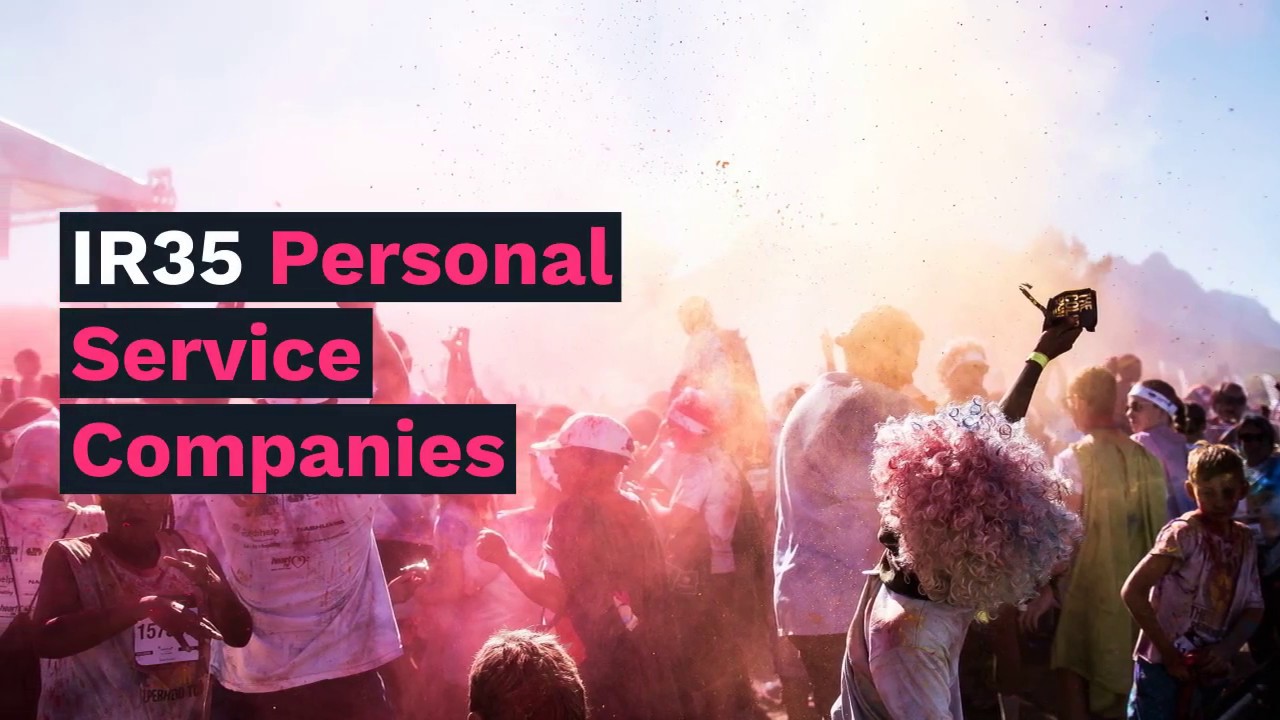 The tax advantages mainly arise by extracting the net taxable profits of the company by way of dividend. This avoids any national insurance contributions (NICs) which would generally have been due if that profit had been extracted by way of remuneration or bonus.

The intention of the rules is to tax most of the income of the company as if it were salary of the person doing the work.

To whom does it apply?

The rules apply if, had the individual sold his/her services directly rather than through a company (or partnership), he/she would have been classed (by HMRC) as employed rather than self-employed.

For example, an individual operating through a personal service company but with only one customer for whom he/she effectively works full-time is likely to be caught by the rules. On the other hand, an individual providing similar services to many customers is far less likely to be affected.

The main points to consider if you are caught by the legislation are:

The last point is considered in more detail below.

One of the major issues under the rules is to establish whether particular relationships or contracts are caught. This is because the dividing line between employment and self-employment has always been a fine one.

All of the factors will be considered, but overall it is the intention and reality of the relationship that matters.

The table below sets out the factors which are relevant to the decision.

Exceptions to the rules

If a company has employees who have 5% or less of the shares in their employer company, the rules will not be applied to the income that those employees generate for the company.

Note however that in establishing whether the 5% test is met, any shares held by ‘associates’ must be included.

How the rules operate

The company operates PAYE & NICs on actual payments of salary to the individual during the year in the normal way.

If, at the end of the tax year - ie 5 April, the individual’s salary from the company, including benefits in kind, amounts to less than the company’s income from all of the contracts to which the rules apply, then the difference (net of allowable expenses) is deemed to have been paid to the individual as salary on 5 April and PAYE/NICs are due.

Where salary is deemed in this way:

Points to consider from the working of the rules

The income included in the computation of the deemed payment on 5 April includes the actual receipts for the tax year.

The expenses are those incurred by the company between these two dates.

In order to perform the calculations, you need to have accurate information for the company’s income and expenses for this period. You may need to keep separate records of the company expenses which will qualify as ‘employee expenses’.

A deduction is given for the deemed payment against profits chargeable to corporation tax as if an expense was incurred on 5 April. This means that relief is given sooner where the accounting date is 5 April.

Payments made by your company into a personal pension plan will reduce the deemed payment. This can be attractive as the employer’s NICs will be saved in addition to PAYE and employee’s NICs.

Other points to consider

Extracting funds from the company

For income earned from contracts which are likely to be caught by the rules, the choices available to extract funds for living expenses include:

The advantage of paying a salary is that the tax payments are spread throughout the year and not left as a large lump sum to pay on 19 April (22 for cleared electronic payment). The disadvantage is fairly obvious!

Borrowing from the company on a temporary basis may mean that no tax is paid when the loan is taken out, but it will result in tax and NICs on the notional interest on the loan. There may also be a need to make a payment to HMRC equal to 32.5% (25% for loans made before 6 April 2016) of the loan under the ‘loans to participators’ rules.

The payment of dividends may be the most attractive route. If a deemed payment is treated as made in a tax year, but the company has already paid the same amount to you or another shareholder during the year as a dividend, you will be allowed to make a claim for the tax on the dividend to be relieved to avoid double taxation.

The company must submit a claim identifying the dividends which are to be relieved.

Example of payment of dividend

There is no immediate tax cost of the dividends being paid out either to the company or to the shareholder.

The company can make a claim for the £20,000 dividend not to be treated as a dividend for tax purposes in Mr Arthur's hands.

Getting ready for 5 April

There is a tight deadline for the calculation of the deemed payment and paying HMRC. The key dates are:

It is therefore in your interests to have accurate information on the company’s income and expenses on a tax year basis and, in particular, separate records of the amount of the company expenses which will qualify as ‘employee expenses’.

Where individuals sell their services through a partnership, the rules are applied to any income arising which would have been taxed as employment income if the partnership had not existed.

In other words, where a partnership receives payment under an ‘employment contract’:

Partnerships excluded from the rules

Many partnerships are not caught by the rules even if one or more of the partners performs work for a client which may have the qualities of an employment contract.

The rules will only apply to partnerships where:

Where a personal service company or partnership fails to deduct and account for PAYE/NICs due under the rules, the normal penalty provisions apply.

If the company or partnership fails to pay, it will be possible for the tax and NICs due to be collected from the individual as happens in certain circumstances under existing PAYE and NIC legislation.

From 6 April 2016, changes to the rules are introduced to restrict tax relief for travel and subsistence expenses for workers engaged through an employment intermediary, such as a recruitment agency or a personal service company.

No relief will be allowed for home to work travel and subsistence where a worker:

Employment intermediary will be defined as a person, other than the worker or the client, who carries on a business (whether or not with a view to profit and whether or not in conjunction with any other business) of supplying labour.

Where a personal service company is also within the scope of the IR35 legislation this measure will only apply to those contracts where a deemed employment payment is made, or would be made if all the individual's remuneration was not being taken as employment income. In these circumstances the supervision, direction or control test will not be used.

MSCs had attempted to avoid the IR35 rules. The types of MSCs vary but are often referred to as ‘composite companies’ or ‘managed PSCs’. HMRC had encountered increasing difficulty in applying the IR35 rules to MSCs because of the large number of workers involved and the labour-intensive nature of the work. Even when the IR35 rules had been successfully applied, an MSC often escaped payment of outstanding tax and NIC as they have no assets and could be wound up.

The government has introduced legislation which applies to MSCs. The rules:

MSCs are required to account for PAYE on all payments received by individuals.

Off-payroll working in the public sector

Changes have been made to the IR35 rules in relation to engagements in the public sector. These changes:

HMRC have provided a new digital tool to help identify whether engagements fall within the new rules, which will apply to contracts entered into, or payments made, on or after 6 April 2017.

We can advise as to the best course of action in your own particular circumstances. If IR35 does apply to you we can help with the necessary record keeping and calculations so please do contact us.